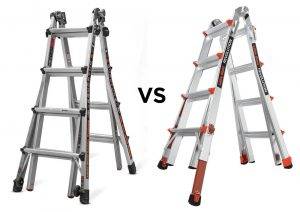 The Little Giant Quantum and Revolution ladders are some of the company’s most popular ladders.

They both come with features that make it easy for you to get jobs done with ease and speed.

They also designed to ensure your safety when using the ladder.

That said, both these ladders although similar in many ways, also differ in some ways. In this post, we discuss the similarities and differences between the Quantum and Revolution ladders.

And we have also included information on who should get which ladder and what jobs are best suited for each.

What are the Differences?

The Little Giant Revolution series is made of military aluminum. And this is a T6 grade aluminum, which is tough and strong. It is also corrosion-resistant and durable.

The Little Giant Quantum is made of a lower grade aluminum compared to the military aluminum. Nevertheless, it is tough and robust. And best of all it is lightweight and rust-resistant.

The Revolution is not compatible with Little Giant’s Air Deck but the Quantum is. This makes the Quantum safer and more functional.

The Air Deck is a mount that has a platform that opens out. And this platform can be used as a workbench. This minimizes the need to keep going down and up the ladder.

The Quantum models are more expensive than the Revolution models. So deciding on which to buy will largely depend on how much you are willing to spend.

Although we would recommend the Quantum because you can mount the Air Deck on it which offers more safety when using the ladder. 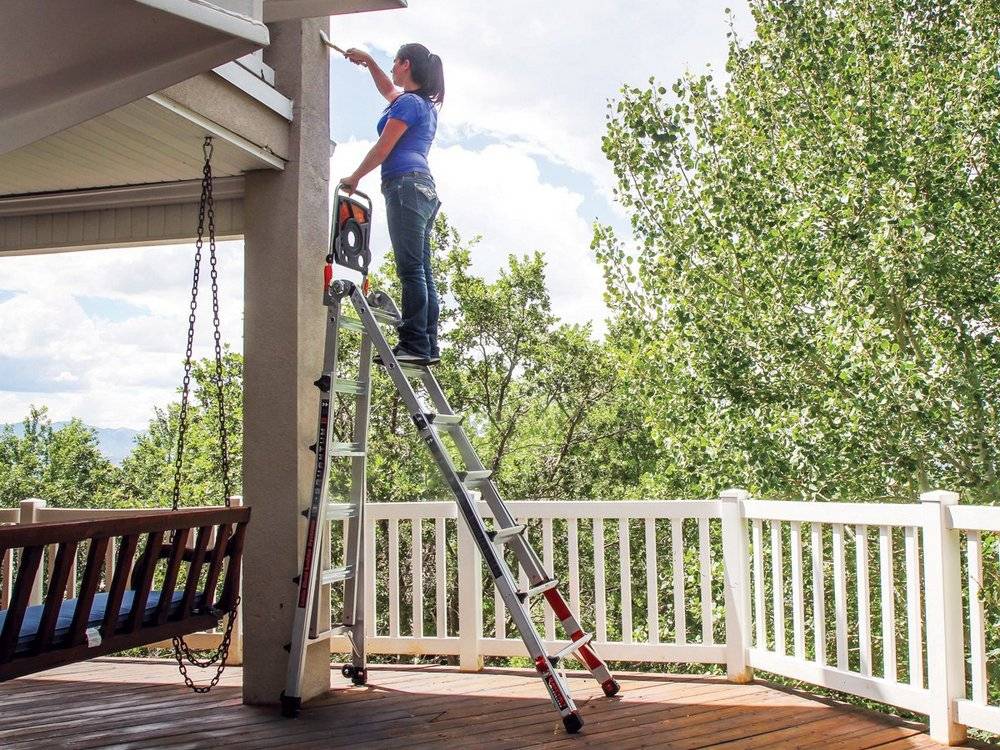 What are the Similarities

Both the Quantum and the Revolution are multipurpose ladders that can be used as extension ladders, A-frame ladders, 90-degree ladders, and stepladders.

They both can be turned into scaffolding systems and they come with a scaffolding plank, you can use the plank as a workbench. Although you are advised not to stand on the plank as it’s not designed to support heavy weights or loads.

Both have ratchet levelers that you can adjust easily when you need to increase the ladder’s leg length. 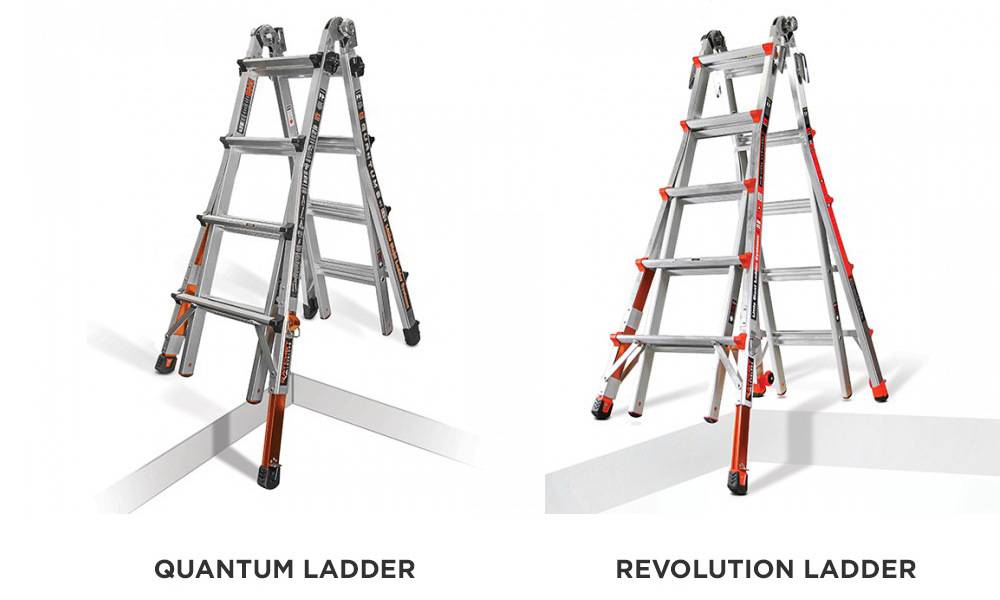 These ratchet levelers are handy particularly when the ground or surface you intend to place the ladder is not level. The retractable legs can extend more than eight inches long.

They both have a weight capacity of 300 pounds. And as stepladders, they can support 300 pounds on each side.

But keep in mind that if you weigh about 200 pounds, avoid carrying anything up and down the ladder that weighs more than 50 pounds. As you can put pressure on the ladder causing it to break, which can result in serious injury.

Both ladders utilize Rock lock and Quad lock locking systems. And they are both made of aluminum for sturdiness and durability. The aluminum material which is also corrosion-resistant gives the ladders long life. 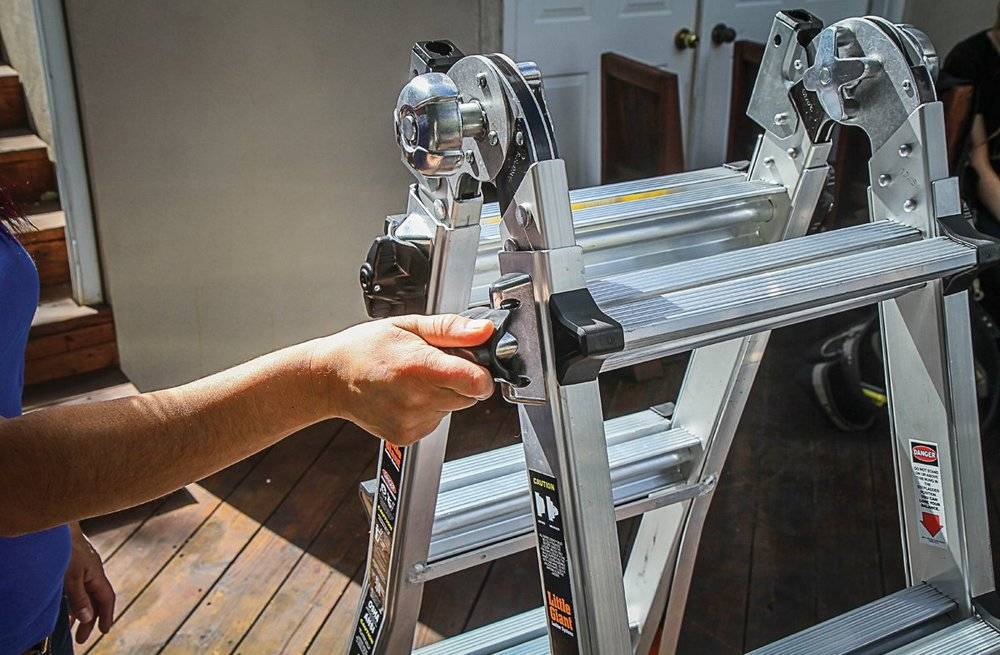 They both come in 3 different models: 17, 22 and 26 inches. You can choose to buy either model with or without ratchet levelers.

The outer parts of each ladder are made of metal, which is more durable than plastic. Both ladders don’t come with a scaffolding plank or other ladder accessories. So you would need to buy them separately.

The Quantum is compatible with Little Giant’s Air Deck which when mounted on the ladder can serve as a handrail. And it also has a sturdy platform that is not too big but big enough to place tools that are not too heavy.

And this is because, with the Quantum, you can get jobs done easily and quickly while not compromising on your safety.

It is easy to store and carry because it has a foldable system, which is why it’s great for people who don’t have much space in their homes. 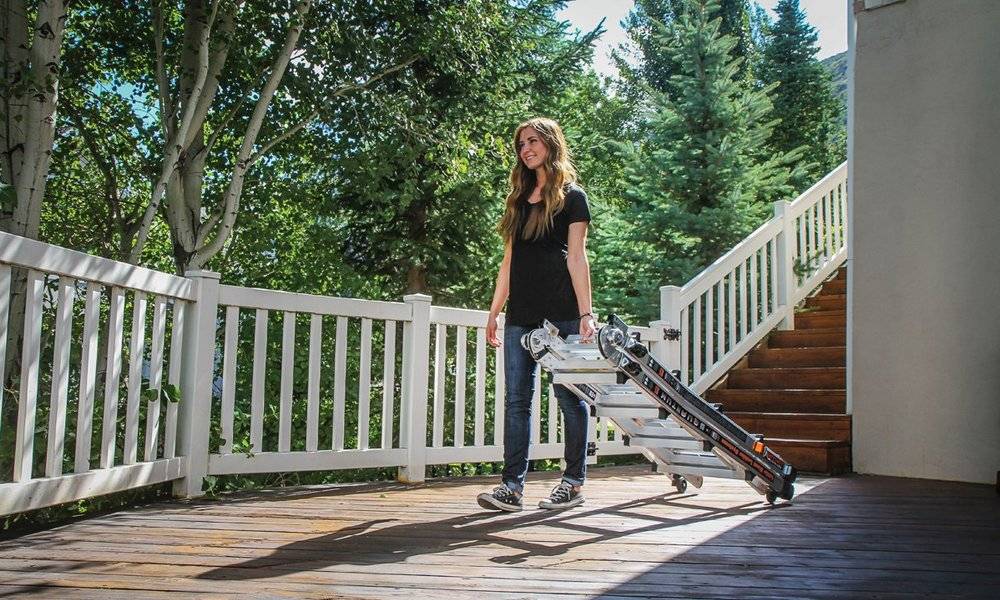 Some people have complained that when it is extended it is hard to set up and carry. So you want to fold it first when you need to carry it and then convert into an extension ladder when you get to the location you want to set it up.

Also, when in the extended position, you need a second person to help you set it up as its heavy.

What’s better about the Revolution

The Revolution is designed for heavy-duty jobs like construction and roofing. And it is made of military aluminum, a tougher and stronger type of aluminum that is used in the automotive and aerospace industries.

So that’s why it’s ideal for heavy-duty jobs. 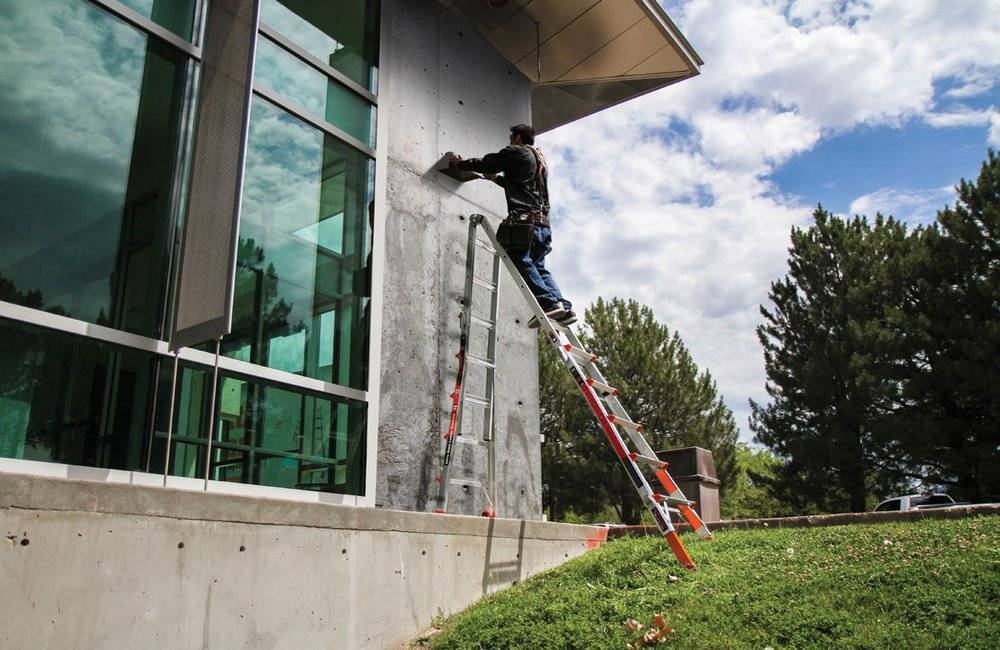 It is less expensive than the Quantum, and this could be because it is not compatible with some of Little Giant’s accessories like the Air Deck.

Who should get the Quantum

The Quantum is great for homeowners because it is made of a type of aluminum which is extremely lightweight. So if you need a ladder for small jobs, this ladder would be a good choice.

It is more expensive than the Revolution, which can discourage some customers. But given that it is compatible with some of Little Giant’s accessories, it is well worth the investment. 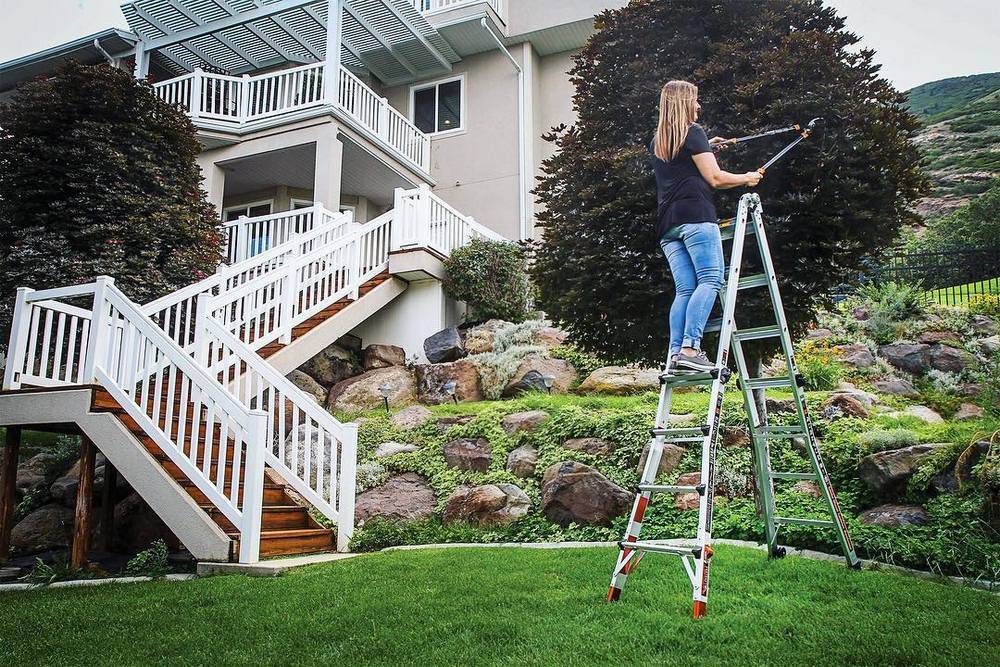 But if you don’t want to spend too much on a multipurpose ladder for one reason or the other, then we recommend you get the Revolution.

Who should get the Revolution

The Revolution is ideal for homeowners who want to gain access to their rooftops and attics. It is also ideal for jobs like window cleaning, landscaping, gardening, and roof repairs.

And because it is made of military aluminum which is extremely tough, it is also ideal for contractors. Also, if you don’t have enough storage space, you can get this ladder because it is foldable making it easy to store and carry. 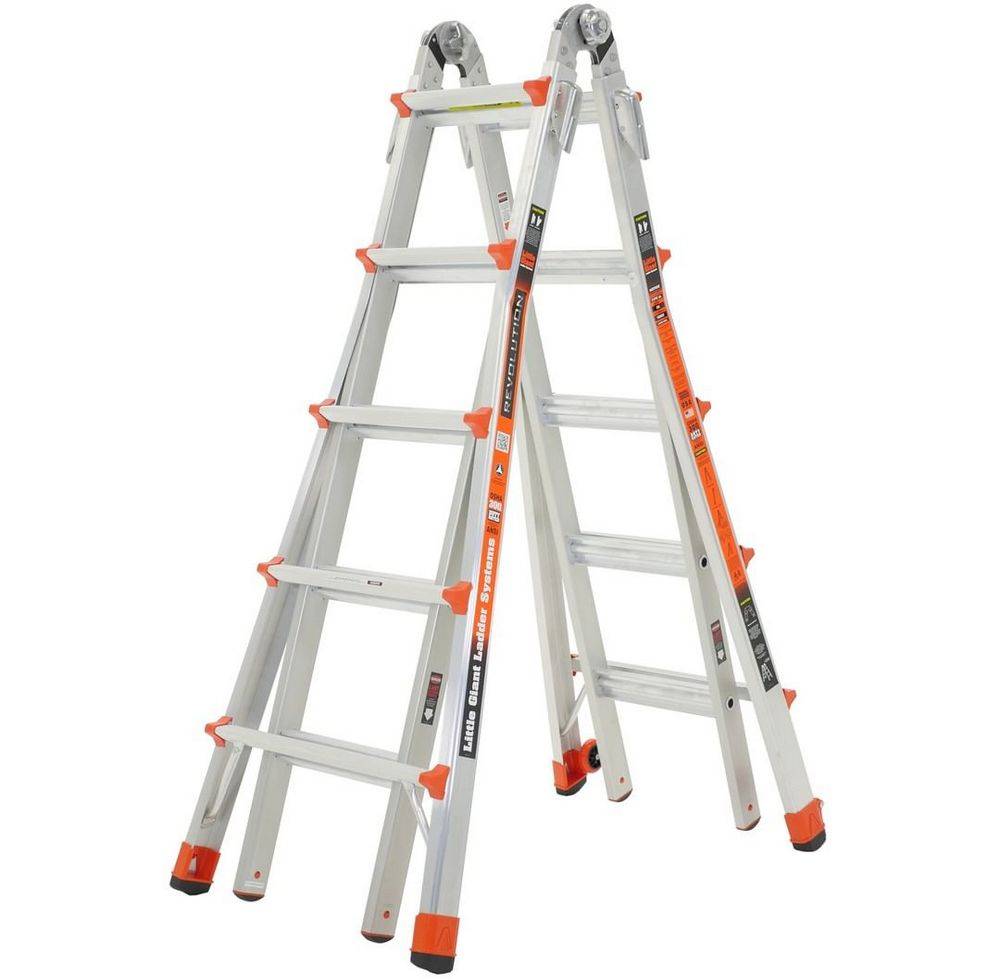 The Revolution models cost less than the Quantum models. So this makes the Revolution more attractive to people who don’t want to spend too much on a multipurpose ladder. 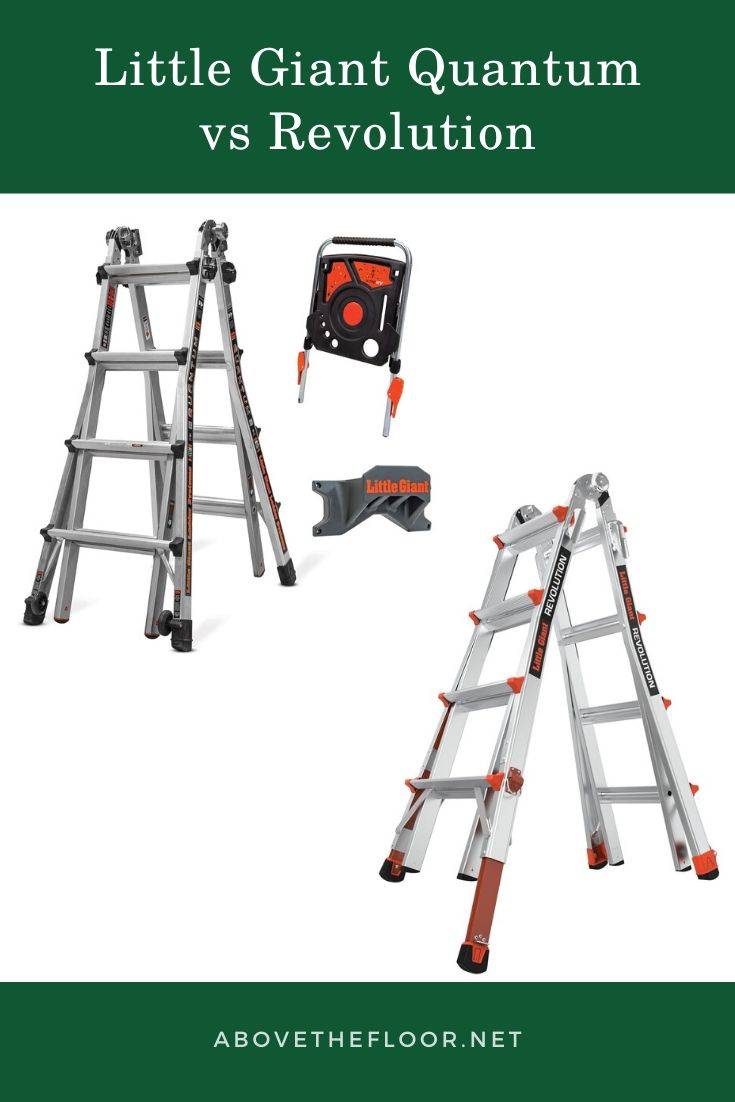