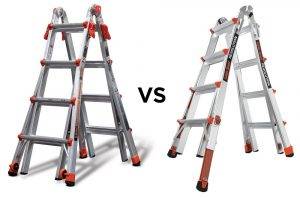 Little Giant is a highly reputable ladder making company that is known for its quality multi-use ladders.

Two of its best selling ladders are the Velocity and Revolution.

These two ladders may have the same brand name but they have some similarities and some differences.

And each ladder is suitable for certain people and certain uses.

So let’s get on with it.

What are the Differences

The Little Giant Velocity is made of aerospace aluminum, which is a T5 grade aluminum commonly used in aircraft construction.  The material is tough, corrosion and stress-resistant, and lightweight.

If you want a small Little Giant multi-purpose ladder then you would need to get the 13-foot Velocity ladder. Since the Revolution series doesn’t have a model smaller than 17 feet.

When it comes to the locking systems, both use different lock and hinge mechanisms. The Velocity series uses a Dual-hinge and Rapid lock mechanisms while the Revolution uses Quad lock and Rock lock mechanisms.

The difference between the quad lock and the dual-pin is that in the former four pins are used to secure the hinge, while in the latter only two pins are used. 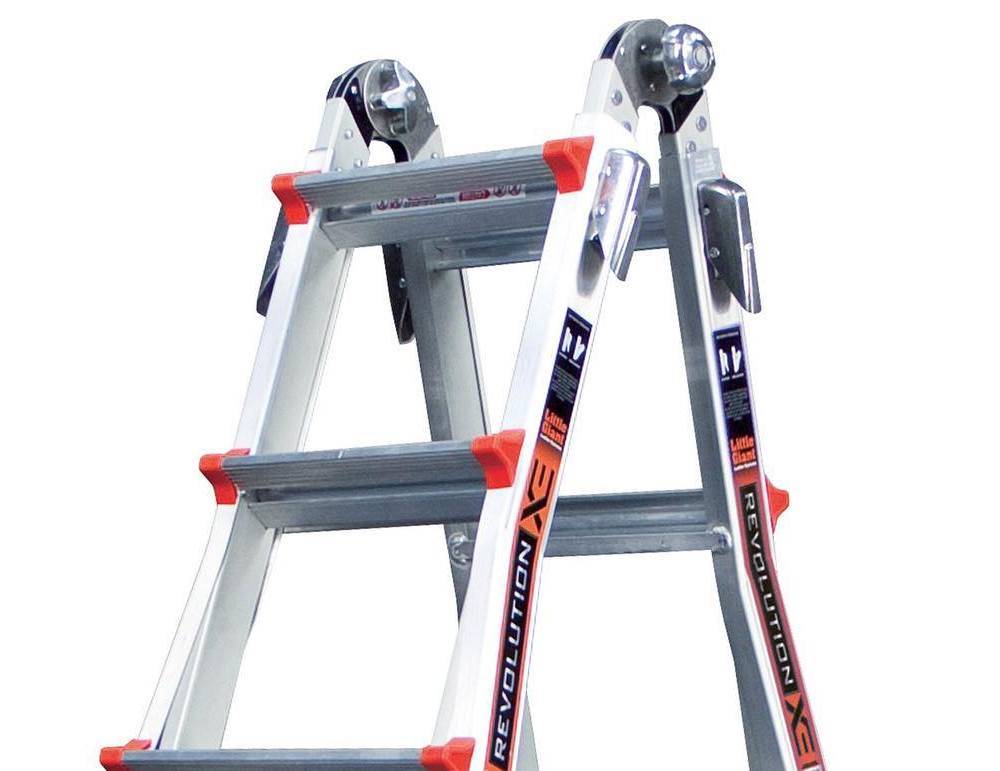 So it’s only the number of pins that make the difference when it comes to these different hinge systems.

The difference between the Rapid locks and the Rock locks is the former locks by twisting the locks to open and close and the latter by pushing the lock inwards. 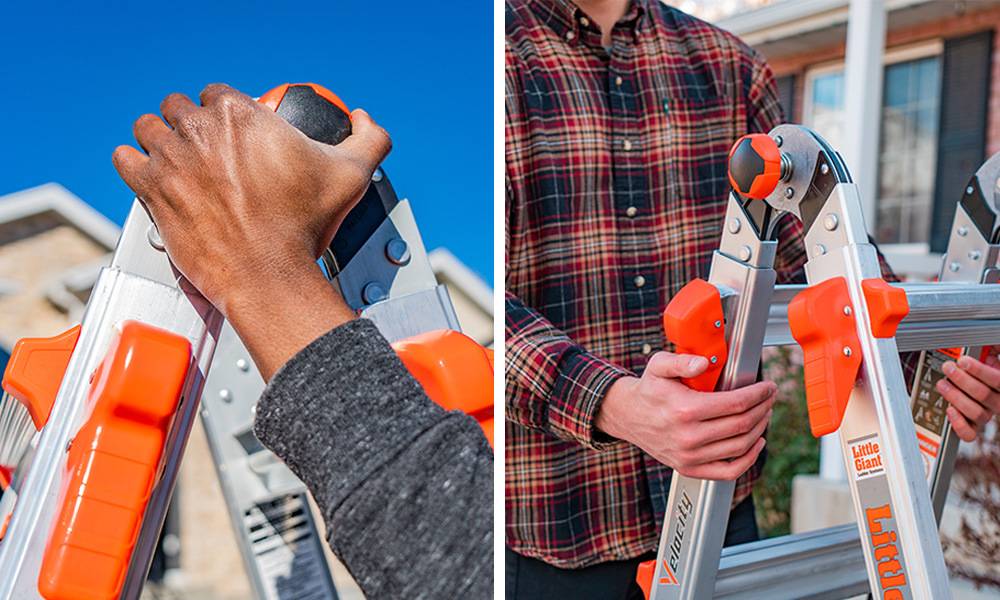 Another difference is that the Velocity models are far much cheaper than the Revolution models. And this is because of the Revolution has slightly advanced features.

What are the Similarities

Both the Velocity and Revolution ladders are A-frame, 90-degree ladders. And they both come with extensions, which allow you to change from the A-frame position to the straight extension position. 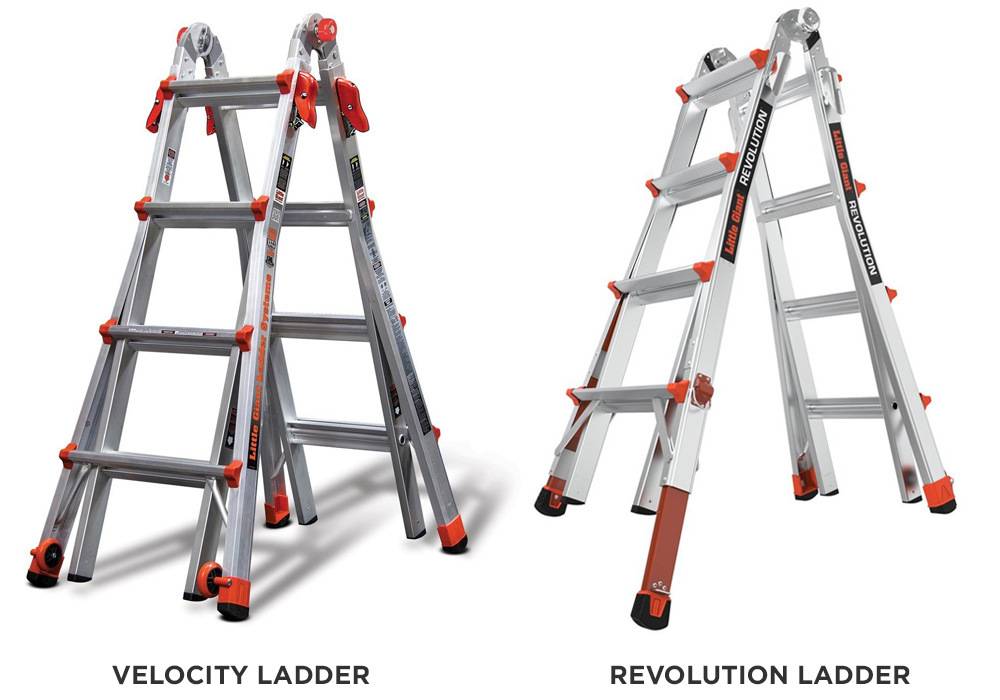 Both ladders can be adjusted in varying lengths when you need to use the ladder on sloping ground or hillside. Or when you want to set it up on a staircase or porch and any other unlevel ground.

Both can be adjusted to 90 degrees when you need to get close to a window or a wall or other tight corner.

They both have rollers at the base for easy transportation. They also have locking systems that allow you to make ladder adjustments and lock on the desired positions. And the locking systems also add to your safety.

Both ladders have a capacity of 300 pounds. They are both made of aluminum for weatherproof performance. And they have slip resistance steps to help prevent injury

They both have scaffolding systems that allow you to set up a scaffolding plank, which you can use as a workbench. But it is not advisable to stand on the plank because it can only support a weight of 250 pounds.

The Velocity 17, 22, and 26 feet models have the same weight, size, maximum and height extension, storage height, A-frame height, and scaffolding height configurations as those of the Revolution.

They are both designed for multi-purposes uses.

The Velocity comes in four different configurations. The smallest being 13 feet, which weighs 25 pounds.

So if you are looking for the smallest and the lightest Little Giant A-type ladder, this is where the Velocity has a bigger advantage over the Revolution. 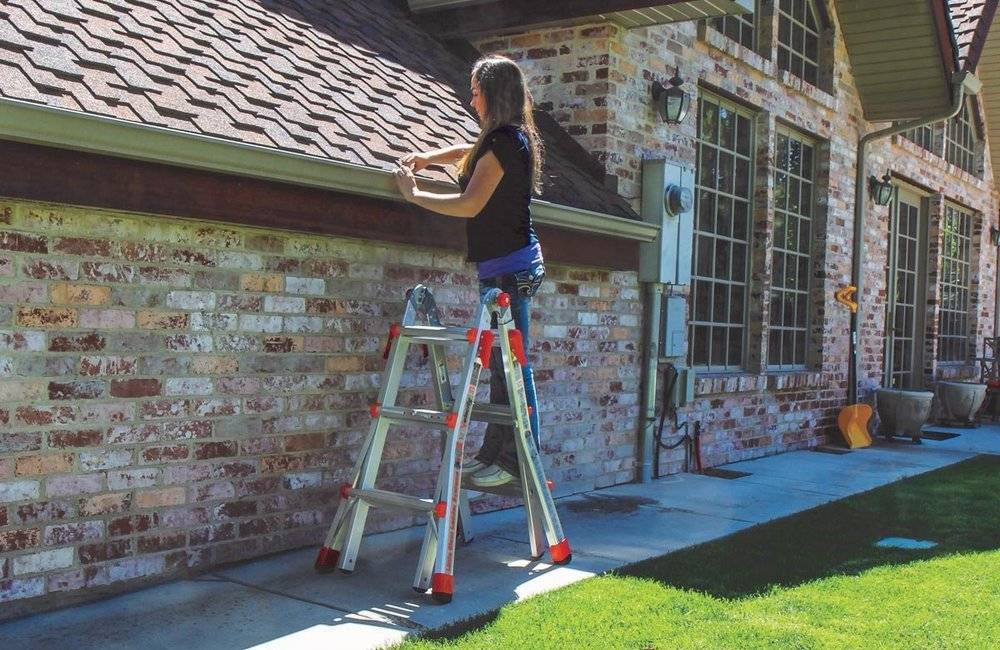 This is because the Revolution’s smallest model is 17 feet, which weighs 32 pounds.

The Revolution has slightly advanced features, which makes it better than the Velocity.

For one it uses military-grade aluminum which is tougher than the aerospace aluminum the Velocity uses. It also has a more advanced and easier to use locking mechanisms than the Velocity.

Who should get the Little Giant Velocity and why?

The Velocity ladder can be used at home to do varying jobs or reach high places like the roof or attic. So it’s great for house or homeowners. It can also be used in construction sites because they can extend beyond 1 meter.

So if you need to access working platforms that are at that height level or higher, you can get the largest 26 feet Velocity model which has an extension height of 23 feet or 7 meters. 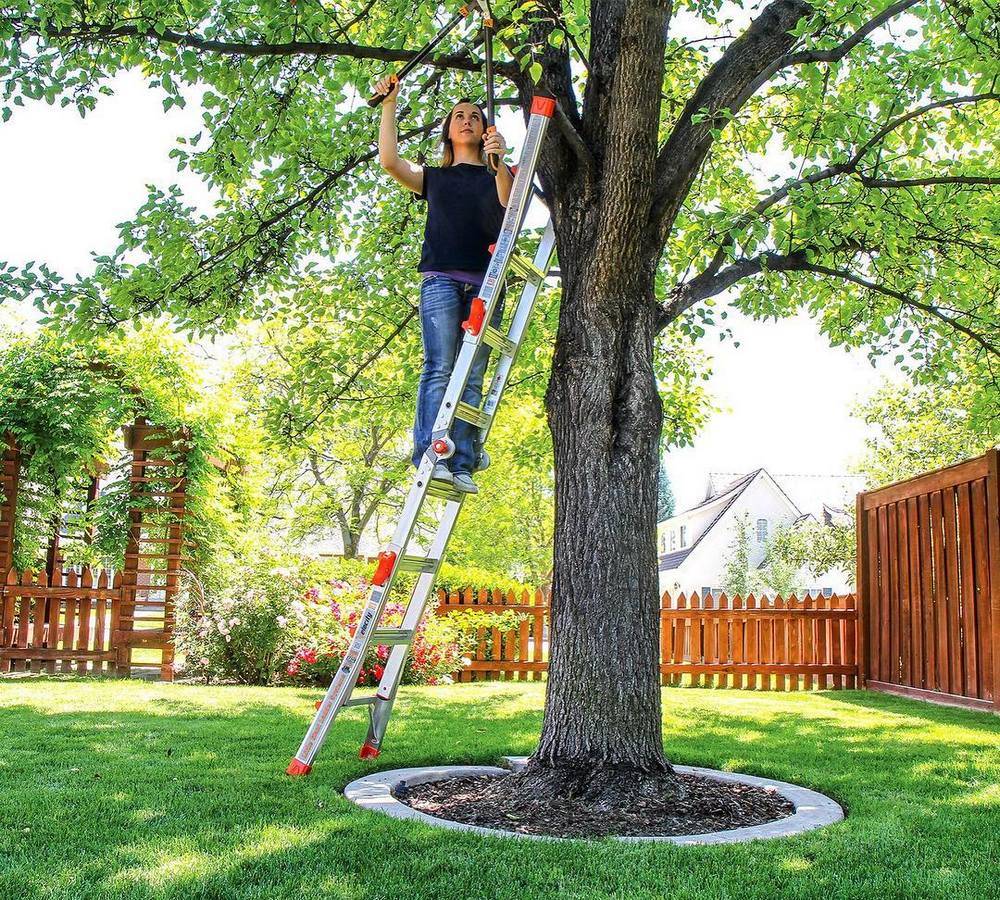 The Velocity ladder can also be used by people who work outdoors like landscapers, gardeners, builders and more.

They are also great for people who have small spaces since they are foldable. And this also makes them easy to carry around even inside your house.

So you don’t need to worry about knocking things in your home as you carry the ladder from point A to point B. 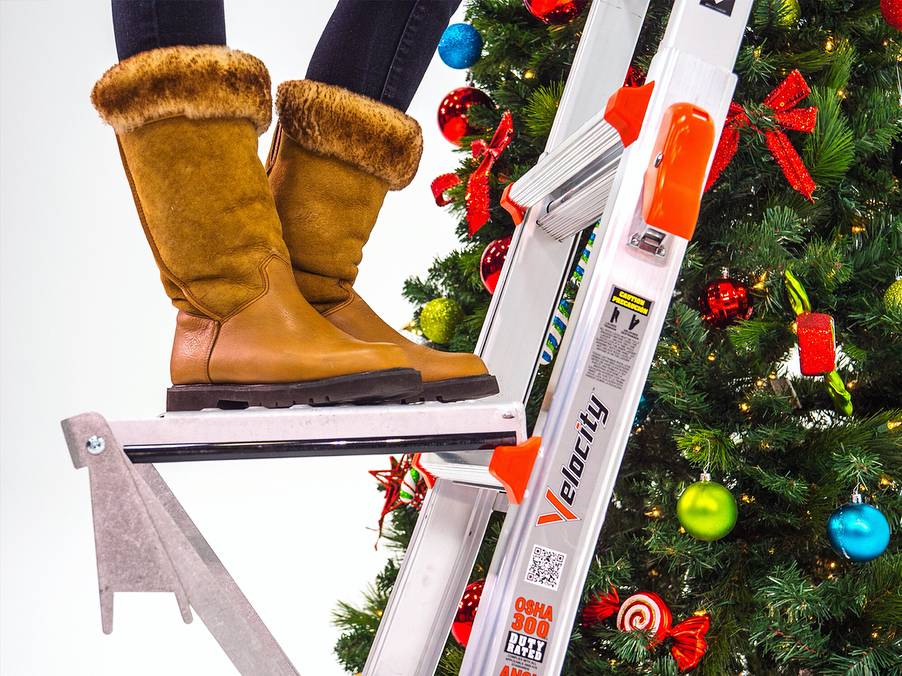 Also, they are great for folks who are looking for affordable A-frame, extension multi-use ladders. There are similar models out there that cost way more than the Velocity ladders.

Who should get the Little Giant Revolution and why?

The Revolution is great for homeowners who want to reach places with their attics or rooftops. They are also ideal for people who do a lot of outdoor work like gardening, landscaping, roof repairs, window cleaning or construction.

They are also ideal for industrial use and this is because they are made of military aluminum which is extra tough. So they can be used in construction sites and warehouses. 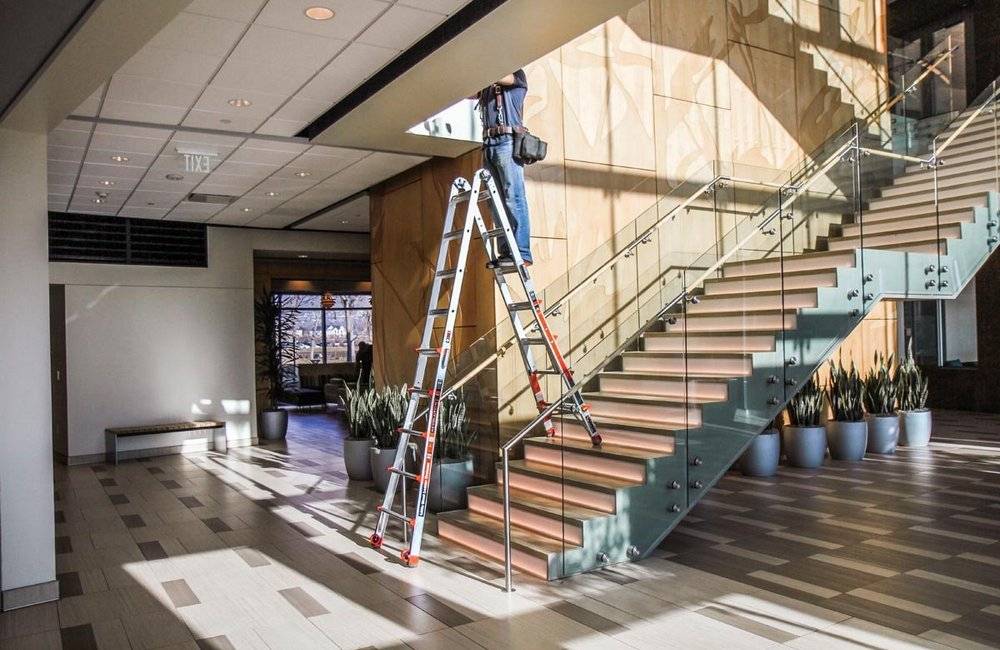 They are so great for people who don’t have much storage space as they are foldable making them easy to store and even carry around.

But they may not be attractive to people who are looking for something cheaper. The Revolution series ladders cost more than the Velocity ladder. 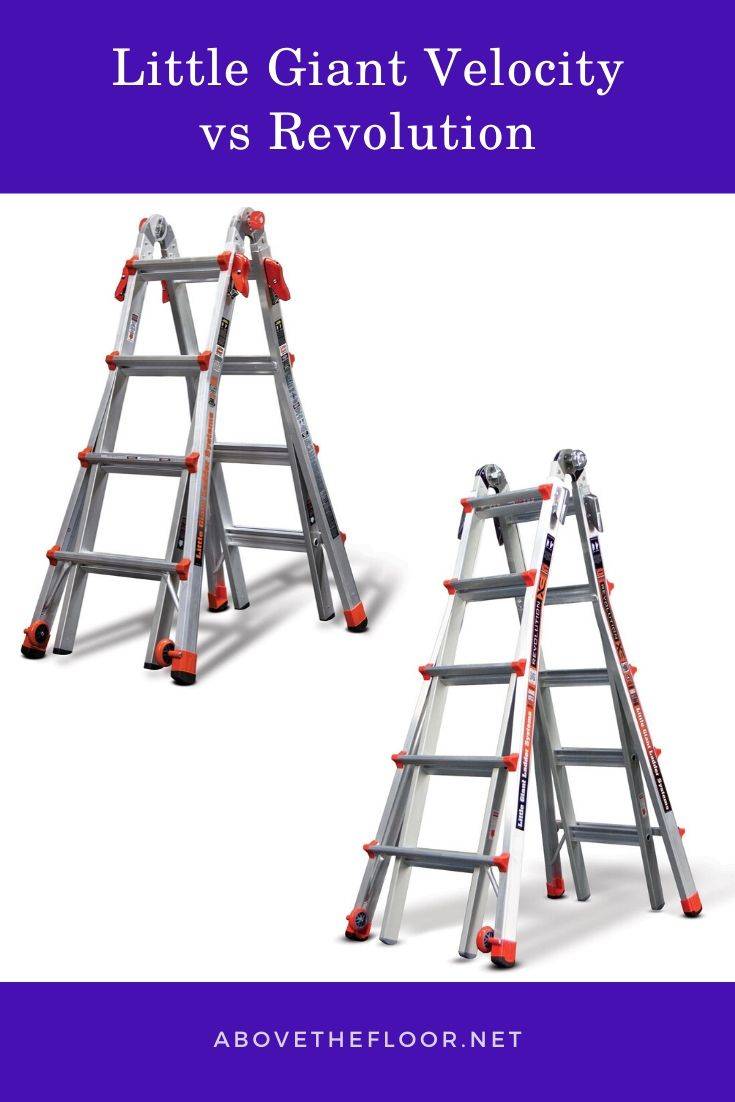